Traditional genealogy research can uncover some amazing things. Using metrical records, you can get pictures of your family for several generations back, perhaps as far as 1800 or even earlier. Birth, marriage, and death records are the backbone of genealogy research, and provide the fundamental structure for our family trees. They can yield names, dates, places, and often occupations. A truly astonishing amount of information can be gathered from these traditional sources.

As vast as the information provided by this kind of research can be, newspaper research can be an invaluable supplement. Only through this kind of research can you flesh out a real picture of your family’s history. In many cases, metrical records are incomplete, indecipherable, or have not survived; with newspaper research you can discover new individuals on your tree who you wouldn’t have found in other ways. In other cases, you can learn Americanized or Germanized names—for example, some of my relatives moved to Vienna around the turn of the century and took on thoroughly German names: Abraham became Heinrich, Chawa became Betti, etc.

If you’re a regular reader of my blog, you’ve already gotten an idea of some of the amazing discoveries I’ve made in my own family history research and for my clients through newspaper research. In a previous blog post, I write about how I discovered that my client’s grandfather was a Talmudic scholar of some renown, and that he gave a lecture in 1917 at the historic Tuoro Synagogue in Newport, Rhode Island.

In my own family research, I found an announcement of the opening of my family’s liquor business in 1866, as well as an advertisement my great-great-great grandfather Israel Penzias placed in his local city newspaper for his furniture store. I also learned that three of my relatives served in World War 1, two were captured by the Russians, one of them received a commendation for bravery, and all survived the war. Finally, through newspaper research I discovered that a relative of mine, Hirsch Pineles, had an audience with the Austrian emperor and prime minister in 1866! Participating in a delegation representing the Jewish population of Galicia, my relative petitioned the Austrian government for the repeal of an anti-Semitic statute which was to have gone into effect. The delegation (including my relative) was very warmly greeted, and the statute never went into effect. Clearly, stories like these help make family history spring to life. 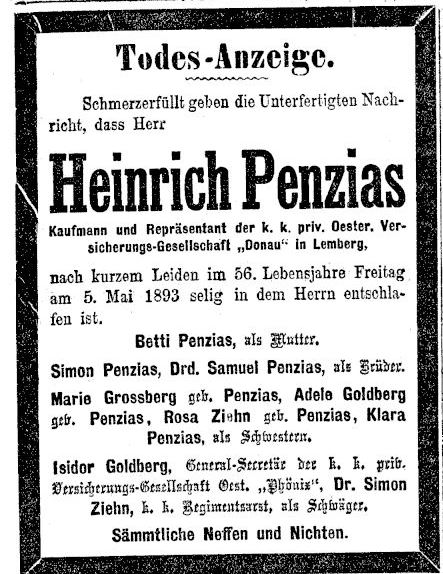 Several important resources for newspaper research exist. For historical research in America, the best place to start is the ProQuest Historical Newspapers database. Available at many libraries and academic institutions, ProQuest offers a fascinating portrait of American history. Featuring the full runs of nearly one hundred newspaper titles, ProQuest’s holdings span from the early 18th century up to the present day. It currently includes more than 55 million digitized pages of news. If your ancestors or relatives have lived in America, there is a good chance that you will find some of them here.

For European research, the best place to start is Europeana Newspapers, available at www.europeana-newspapers.eu. A project of the European Commission’s CIP 2007, Europeana Newspapers contains 18 million newspaper pages from across Europe. Another excellent resource is Austrian Newspapers Online (ANNO), a project of the Austrian National Library. Containing over 1000 newspapers and magazines from throughout the former Austrian Empire, its holdings span from the 1689 until 1947. ANNO is located at http://anno.onb.ac.at. Both Europeana Newspapers and ANNO are free and available from the comfort of your own home. Best of all, all three of these amazing resources are fully text searchable. Other commercial sites such as https://www.newspapers.com/ are also invaluable, particularly for American and British research. 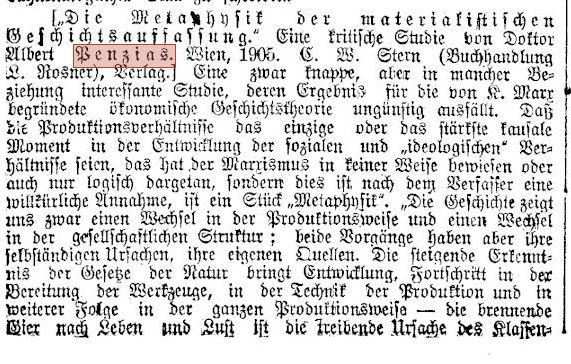 As with much of genealogy research, the biggest obstacle facing the researcher is language. Since my blog is written in English I will assume that my readers are familiar with that language. For most of you, the newspapers in ProQuest will pose no difficulty. However, European newspapers—whether using ANNO, Europeana Newspapers, or another resource—will be in the language of the original country, which may pose a far greater challenge. For Jewish families, the vast majority of what you will find will not be in English. Depending on your family’s location, articles may be in German, Polish, Russian, or another language—and frequently shifting borders means that information you uncover about your family may be written in different languages in different periods, even if your family never moved. Moreover, the ANNO website is written in German, requiring a knowledge of that language in order to perform a search. 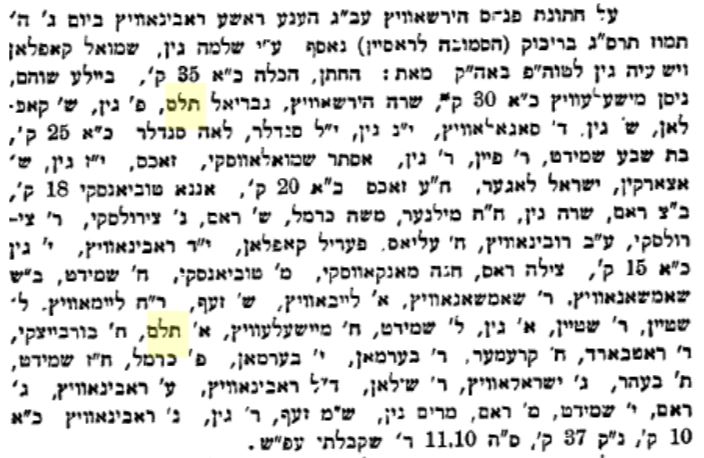 Newspaper searches can also be very difficult because prior to the twentieth century, name spellings were not consistent. The same last name can be spelled in a wide variety of ways—especially when families moved to countries with different languages but also within the same language. Moreover, the process of optical character recognition (OCR) is hardly perfect, so a variety of machine-induced errors may make search results more challenging.

An additional, often significant problem can arise from the names themselves. Many last names are very common; when wading through search results one must be able to determine—quickly—which articles pertain to your family and which are about different families with the same name. Even worse, many names are also very common nouns. For example, my grandfather’s grandmother’s maiden name, Krzak, means “bush” in Polish (although I tend to doubt that I am related to the former presidents). When searching for this name in Polish-language historical newspapers, it can be very difficult to distinguish articles about people named Krzak from articles about gardening which mention bushes.

It would be highly inefficient to hire a translator to wade through the potentially thousands of results before filtering them to select only the ones of relevance. However, such filtering requires significant language skills.

If you have ancestors in Central or Eastern Europe but do not have language skills yourself, it can be very difficult to research them yourself. Instead, it may be beneficial to hire someone with both language proficiency and genealogical expertise. At Lost Roots Family History, I have significant experience in both. Please feel free to visit my main website at www.lostrootsfamilyhistory.com, where you can learn about my services or contact me. Through historical newspaper research, I may be able to make your family history come alive, transforming trees of names and dates into real stories about real people.