Stumbling on a Huge Discovery

In modern genealogy research, we can often find surprisingly much from the comfort of our own home. If we are lucky and persistent, we can build up a detailed history of our families stretching back centuries. Frequent readers of this blog will know that in my own research, I was able to build up a huge amount of knowledge about my family’s history in Galicia and Congress Poland without ever leaving Los Angeles. Yet however much you research, there will always be holes. Tantalizing loose ends will gnaw at you, making you wonder what more might be hidden out of reach.

My Own Loose Ends

As mentioned in previous blog posts, my grandfather had known virtually nothing about his father’s family. Hirsch and Fraida Grajewski, his paternal grandparents, had died before he was born, and his father had not been particularly close with them—so there had been no one to pass on knowledge of that side of the family to him. In my research, I was able to locate Hirsch and Fraida’s marriage record from 1894.

After teaching myself how to read nineteenth-century Russian cursive (a months-long process involving lots of trial and error, and an inordinate amount of patience), I was able to work out many details of almost all branches of that side of the family. After more research, I was able to trace Fraida’s mother’s and father’s family back to the 1750s and Hirsch’s mother’s family to right around 1800. I also was able to locate where in Poland these families had been living during the early 1800s. Yet on Hirsch’s father’s side was complete silence. 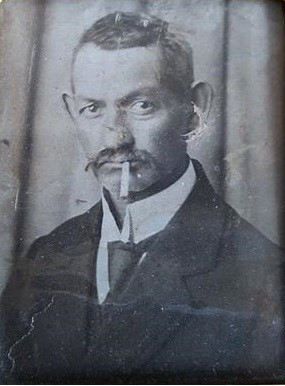 I knew from the marriage document that Hirsch’s father’s name was Josek Grajewski, but I was unable to find anything about him. I did locate a wedding document from Radziejow, about 100 miles west of Warsaw, but although the document did give his parents’ names (Gerszon and Rifke) it said very nothing about them or their family origins. Though I found quite a few of his in-laws in Radziejow, there was no record of any Grajewski there. The family did not seem to be from Radziejow, but I could not find them anywhere else.

So things stood for about six months.

Marriage records form one of the bedrocks of genealogy research, and can be the most valuable primary documents due to the detailed information they often provide on both sets of parents. Moreover, the ages given in marriage documents tend to be more accurate than those on death records. These basic marriage records are familiar to almost all genealogy researchers, and are usually available online or at family history centers.

However, basic marriage records do not necessarily tell the whole story. When people got married in the nineteenth century, sometimes the authorities also kept an extra file on the newly married couple. Known as “marriage alegata,” these documents often contain copies of birth records—which may be invaluable in cases where the originals have been lost. Moreover, if a person was not born in the same town as the marriage, the alegata files may provide the only clue for locating them. They can also contain other information that might not be easily located elsewhere. For more detailed general information on marriage alegata, see http://www.ipgs.us/iwonad/artdirectory/alegata.html.

Although they may be extremely valuable, these documents were not microfilmed by the Mormons or anyone else. Unfortunately, they are generally not available online, and can only be viewed in the actual archives.

Hirsch’s parents’ marriage in Radziejow took place in 1865. When researching the archival holdings for this town, I had determined that marriage alegata existed for the town of Radziejow for several years, including 1865. Moreover, I was able to work out that they were held in the Polish State Archives in the town of Wloclawek. I knew exactly what building the record I wanted was in—but it was a continent, an ocean, and half of another continent away. 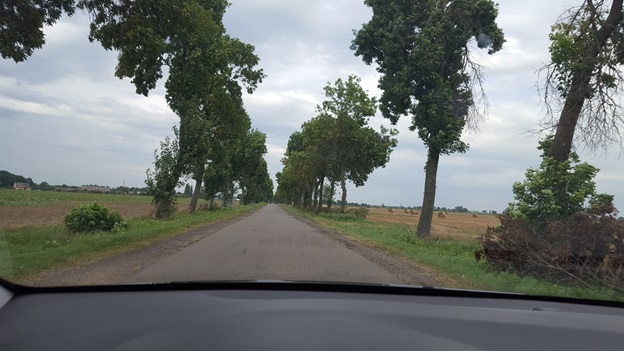 Last November, I was invited to participate in a symposium in Warsaw for Gesher Galicia, one of the most important regional Jewish genealogy societies (see: link). I presented at the symposium in June 2018 (see: link) and also attended most of the IAJGS (International Association of Jewish Genealogical Societies) conference, also in Warsaw during the same week. The six-day conference was jam-packed with fascinating information, deep insights, amazing speakers, and new friends (see: link).

After the conference finished, I of course decided that a road trip was in order. I hired an Uber, conversed in Russian with my Ukrainian driver on the way to the airport, rented a car, and drove my manual transmission car (thanks, Dad!) off into the Polish countryside. Naturally, my first stop was Wloclawek, about fifty miles northwest of Warsaw, to pay a visit to the archives holding the document I wanted to see. Ignoring the loud protestations of my GPS, I deliberately chose a winding route on narrow country lanes. Passing through the lush Mazovian countryside, I paralleled the Vistula River for most of the way, often coming within yards of the river bank. Not finding a suitable radio station, I listened in my mind’s ear to dozens of Chopin mazurkas—which were inspired by this very same Mazovian countryside and Vistula River. 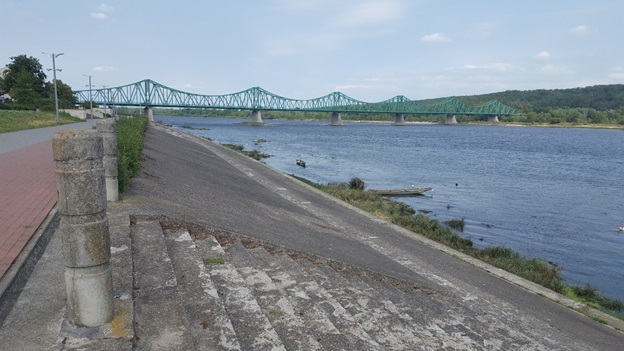 When I arrived at the archives, my heart was racing with excitement. I was just so curious and excited about what I might discover about this Grajewski ancestor, who was—after all—the source of my last name (through its Americanized variant “Grayson,” courtesy of my grandfather). I suspected I might find something interesting—perhaps a birth certificate—but really I had no idea what to expect. I went into the building, gave the archivist the reference number, and eagerly awaited his return with the document. My excitement was palpable.

After what seemed an eternity, he finally returned with a bound volume. Leafing gingerly through hundred-fifty-year-old paper, I soon found Josek’s document. At first, I was quite disappointed. It was the same Polish-language marriage document I had seen a copy of in the Mormon family center in Los Angeles. My heart sank—but then I turned the page.

The next page of the document was definitely not something I had seen before, and was certainly not available anywhere outside the archive. The first thing I noticed was the phrase “Aleksandr Nikolaievich, emperor of all Russians, etc. etc. etc.,” written in large Cyrillic letters. I immediately saw Josek Grajewski’s name further down the page, so I knew that this was a BIG deal! In fact, I was so excited that I stood up and began clapping right in the middle of the archives! Luckily, only one other researcher was in the room, and she did not seem terribly interested in me or my five-thousand-mile journey.

It turns out that my great-great-great grandfather had received a bronze medal for military services during the Crimean War! The document I found describes his military service and lists physical ailments (including asthma and rheumatoid arthritis). It even gives a physical description: twenty-eight years old, blond hair, blond beard, grey eyes, and a medium nose (whatever that means!). 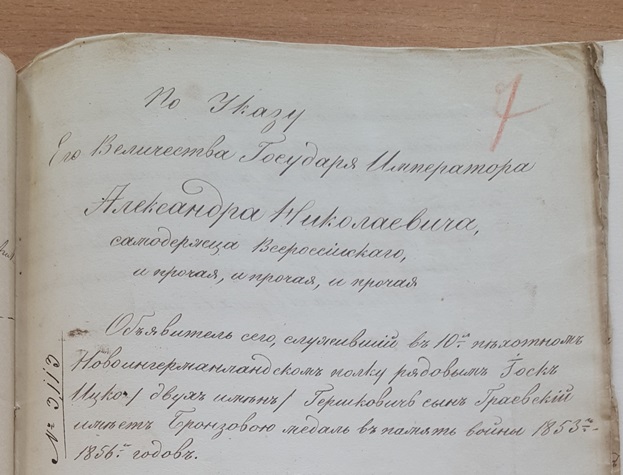 The document goes on to state that as a reward for his period of service to the crown, Josek was granted the right to settle anywhere in the entire Russian Empire—even Moscow or St. Petersburg. To live in the two imperial cities he was required to have an occupation, to maintain good character, to be honest, to obey any orders given to him by law enforcement, and to shave his beard; no restrictions were placed on his living in other parts of Russia. To understand the significance of this, is important to realize that until 1917 Jews were explicitly forbidden from living anywhere in Russia except its western-most provinces, called the Pale of Settlement. Being granted an exception to this was highly unusual, especially for the imperial cities—although it was often granted to veterans.

At the bottom of the second page, the military record also provided Josek’s home town, shedding light on another mystery. It turns out that he had come from a town called Stawiski, located about a hundred miles northeast of Warsaw. As described in in another blog post, I was able to use this information to connect Josek with another Grajewski family living in the late nineteenth century in Bialystok who had also came from Stawiski (see: link).

As a side note, my ability to read nineteenth-century Russian cursive helped me find this record. Had I requested a scan of the document from the archives instead of going in person, it is conceivable that my request might have gone to an archivist without this ability. Because Josek’s name is written only in Russian on this document, an archivist who could not read Russian might not have realized that it belonged to the same person as the marriage document on the previous page.

At any rate, after being placed in his marriage file in 1865, Josek’s document stayed there year in and year out. It remained unseen by human eyes until it would be opened, read, and examined by his great-great-great grandson more than 150 years later. It and other documents like it stand in silent testimony to the lives and achievements of our ancestors.

The Best Way to Present 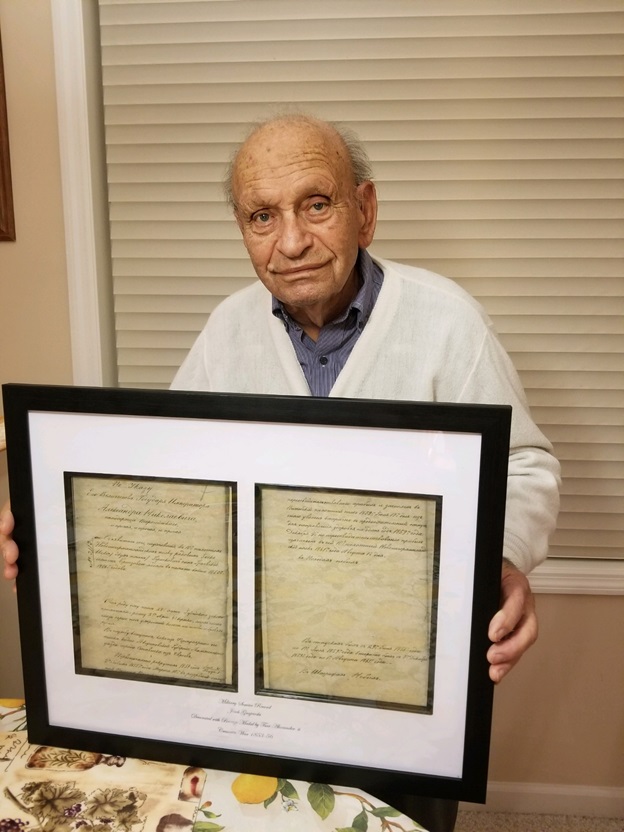 “You know, I’d really love to have a copy of that,” my grandfather said to me when I e-mailed him the digital photos I had taken. I was already planning on making a big surprise for him, so I pretended to ignore his comment. Enlisting the help of my father who lives on the same side of the country as my grandparents, I printed the first two pages of the record on a fine parchment paper and found a frame for it. A few days before Thanksgiving, my parents went to Long Island and presented it to my grandfather.

As mentioned above, before I began my research my grandfather never knew anything about his father’s family. As a direct result of my research, I had the honor of being able to present him with a precious family heirloom.

Genealogy is far from a dusty pastime of collecting useless names and dates. It is the search for us. The documents and information we uncover can can tell us just a little bit more about ourselves, and can lead us to hold our heads just a little bit higher.