As frequent readers of my blog will know, one of the main branches of my family came from Lemberg, Galicia (now L’viv, Ukraine). Some of the first stories my grandfather told me about our family’s history were about his grandparents there. As a result, I have focused much time and attention researching Galicia. Originally part of Poland, it became the north-easternmost province of the Austrian Empire in the late eighteenth century. Today the region is split between Poland and Ukraine.

As in any area, birth, marriage, and death records form the basis of genealogy research in Galicia. For Lemberg, the capital city and the place where my ancestors came from, these are generally available starting around 1800 or shortly thereafter. However, records from before around 1830 are frustratingly vague and offer very little information. Thankfully, I stumbled on a set of records that offer much more detailed information. This set of records dramatically expanded my knowledge of my family in a very early period.

Evidence Books: What Are They?

Shortly after Austria took over Galicia during the Partitions of Poland, it decided to keep track of the Jewish population there. As part of these efforts, the Austrian government assigned so-called “congregational family numbers” to Jewish families as a way of tallying them and for taxation purposes. Families were first assigned numbers in 1795. Whenever a husband and wife got married after then, both bride and groom were removed from their parents’ numbers and the newly married couple was assigned a number of their own. These numbers appear on early birth and death records.

The source I stumbled on, termed “family evidence books” by modern researchers, appears to have been the primary repository for the information these family numbers sorted. They seem to have served as a combination of census and financial documents for Jewish families in Lemberg. The books slightly predate the earliest Jewish metrical records; critically, they also contain far more detailed information. The records contained in them provide a veritable treasure trove of fascinating insights about our ancestors.

The records in the family evidence books were initially created during the period 1795 through 1804; records for some families continue through the 1840s. Although the books are arranged by family number rather than by last name, the exact same family numbers appear on early metrical records. Because of this, it is a simple matter to find people of interest.

The records offer a great deal of information beyond what is available from standard genealogy sources: wives’ names (including maiden names), occupations of heads of household, comprehensive lists of all children born during the years when the records were kept, exact birth dates, death dates, and more. Additionally, the records also provide previous family numbers the husband and wife had been listed under before marrying. Moreover, they give new family numbers assigned to children when they married. Looking up the records for these family numbers allows genealogists to track parents, descendants, and other relatives.

Thankfully, the evidence books have been digitized and are easily available at LDS Family History Centers (described as “Lists of synagogue members and their tax debts, 1796-1850”; film # 24398962 through 2441497). Unfortunately, much of the information contained in them is written in Kurrentschrift German. To get the maximum benefit out of this source, a knowledge of that script is necessary. 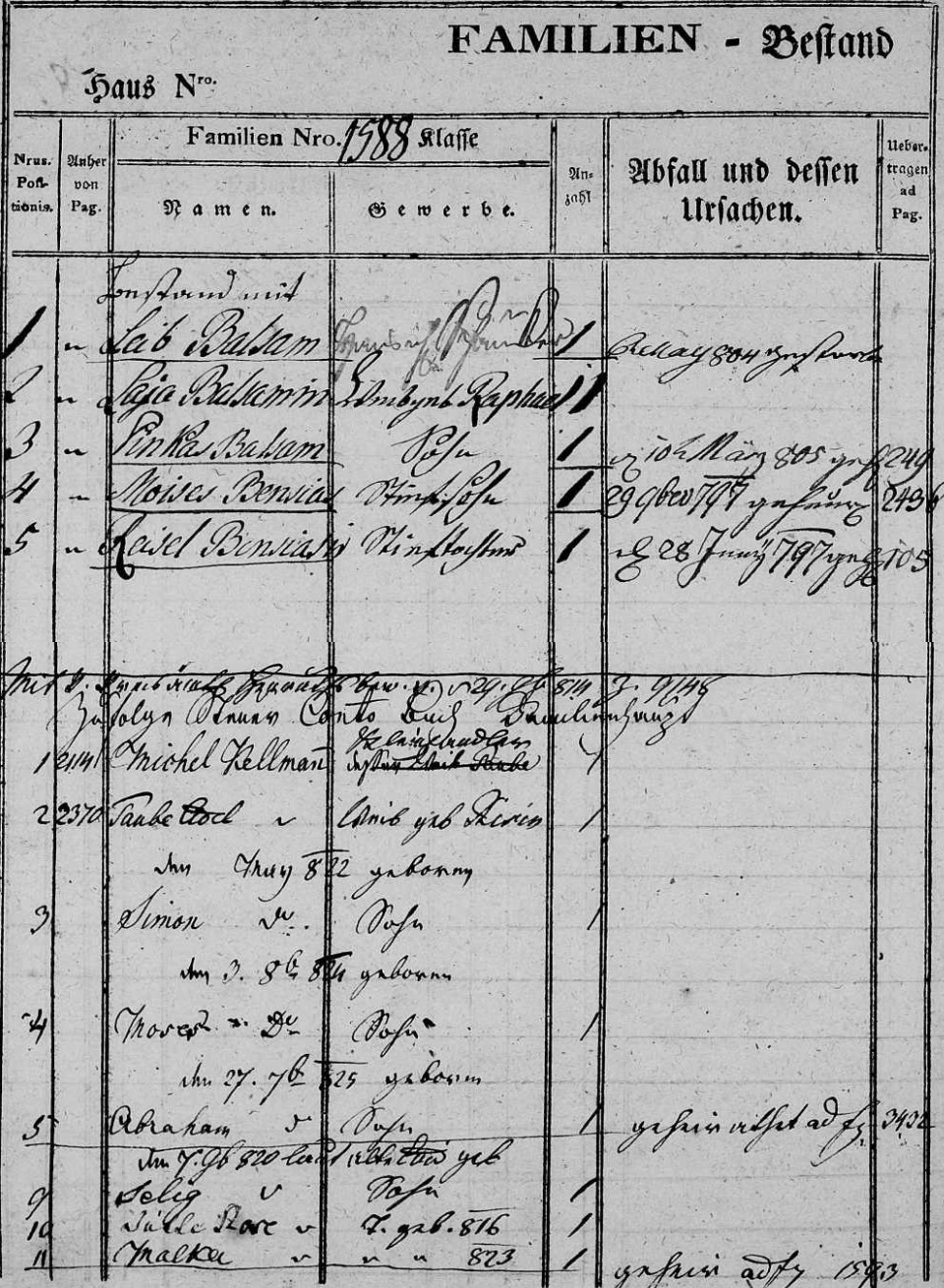 What This Meant for My Own Family Research

By using these records, I was able to greatly expand my knowledge of my family’s early history. Before using them, I had previously identified two “earliest” ancestors: Baruch Penzias (family #2913) and Moses Penzias (family #2436). However, I knew virtually nothing about them beyond their names and addresses, denoted as house numbers. I assumed that they had been brothers, and judging by their children’s birth dates I assumed that they had been born shortly before 1790. From other records I learned that Moses’s wife was Hudes and that Baruch’s wife was Chawa.

The information I uncovered from the family evidence book was astounding. Turning to the corresponding family numbers, I discovered that Moses was actually born in 1769, Hudes in 1776, Baruch in 1774, and Chawa in 1778—almost twenty years earlier than I had surmised. From Moses’s family record, I found that Hudes’s maiden name was Rottenberg and that she had come from “Kamiantes” (perhaps today’s Kamianets-Podilsky, then a market town about a hundred kilometers east of Lemberg). Additionally, I found that Moses was a fabric merchant (“Leinwandhändler”).

Although Baruch and Chawa were already married by 1795, Moses was still listed under his parents’ family number, marrying Hudes two years later in 1797. Because of this, Moses’s record lists his previous family number, 1588. When I turned to this record page I found that his mother’s name was Laja, that his father had died prior to 1795, and that Laja had remarried. In fact, I even found Moses’s maternal grandfather’s name—Rafael (perhaps born circa 1720). Finally, I found that Moses had a sister named Reisel who later married and was given a new family number. When I looked at the record for this number, I found that her husband was named Marcus Chierer. Searching through the database for this last name, I traced a whole branch of my family I had not previously known about.

Using these evidence books, I have found similarly detailed information on Baruch Penzias. I also found information about an Isaac Penzias who I had not encountered before encountering the evidence books. The information gathered through this source has dramatically enhanced my knowledge of my family in the late 18th & early 19th century. It has also raised tantalizing clues and opened new questions, the answers to which may be lost to the depths of time. Or perhaps they may lie waiting to be discovered in some other hidden, out-of-the-way record set.