As with many other fields, the application of computer technology has revolutionized the practice of genealogy. If you are lucky enough to have a good database for your region, you can accomplish more in just a few minutes than you could in months of intensive research—and you can sometimes do it without even leaving your house. As just one example, by searching in a database and recording the results, it is now possible to get a rough listing of all people with a given surname in a given town. In the past, to get this you would have had to go through the entire set of microfilms for that town by hand, recording and tabulating the results.

More than the convenience factor, genealogical databases allow us to do things that might not even have been possible in the past. Before the advent of such resources, you would have had to know exactly where your family was from in order to begin research. It’s true that you might have been lucky and stumbled on a record, newspaper article, or other source of information telling you something about where they used to be. However, it used to be much more difficult to locate your family if you did not already know where they were or where they went.

Using modern genealogical databases and some advanced search technique, however, it is much easier to trace our family’s migration patterns. For example, it is now a straightforward matter to get a list of villages, towns, and cities where people of a certain surname were living — and when they were living there. If you know your family came from a particular region but do not know the town, you can simply search for your family name and see which towns had people with your last name living in them. Prior to genealogical databases, this would have entailed searching through the microfilms or original records of every single town in the region—a truly Herculean undertaking. This is easiest if your last name is unique, but a little detective work can help locate even families with more common last names.

Your family probably did not live in only one place. Although they may have originated in a particular town, they more than likely spread to surrounding towns and villages. Some family members may have gone farther afield, particularly during the period of industrialization during the later nineteenth and early twentieth centuries. One really great way of finding this is by combining your family surname with your ancestral town in the “any field” or “keyword” box rather than the “town” box. For example, you might want to look for people with the last name of Grajewski living in other places but whose records state that they used to be living in the town of Stawiski.

It can also be possible to trace single individuals rather than entire families. This can be accomplished by combining surnames with given names, tallying the results, and looking for clues to distinguish between different individuals with the same names. Sometimes a person may disappear from records in one place and suddenly show up in surprising locations, or might pop up somewhere while on a journey. Use these search strategies to tease out as much information as you can from databases.

Sometimes your ancestors may really surprise you. For example, one branch of my family was from Lemberg, Galicia (today’s L’viv, Ukraine). The whole family (and a very Jewish one at that) was living, getting married, and having children there, yet one of them mysteriously shows up getting baptized in Langenbeutigen, Germany in 1821. The baby and his parents returned to Lemberg later that year, and the parents continue appearing in Lemberg records (unfortunately, the baby died soon after, as was common in an era of very high infant mortality). Just what they would have been doing in a small village in western Germany, seven hundred miles away from home at a time when most people never ventured more than twenty miles away from where they were born, will probably remain a mystery. But the point is that without the benefit of modern databases, I never would have found them there and stumbled on this mystery.

For all of their exceptional use, there are many caveats as well. Most significantly, records did not survive for all towns, and many of the record books that do survive are in fragmentary form. Moreover, indexing of these original records and placement of the information into databases is both uneven and far from complete. In other words, just because a name doesn’t appear somewhere does not by any means guarantee that the person or family wasn’t there.

A second issue is with the spelling of surnames. Spellings were far from uniform during the nineteenth century, so it is imperative to be creative when searching for your ancestor’s names. Names could be spelled in many different ways during the nineteenth century, or could have been accidentally misspelled on records. The spelling of names can be altered when families moved or when borders shifted. Moreover, handwriting can be poor, and many records are written in antiquated handwriting systems that can be extremely difficult to decipher. When indexing original records for inclusion in databases, it is very common for indexers to misread or mistranscribe names. Finally, records may be written using different alphabets and could be transcribed into Latin letters in a variety of ways. 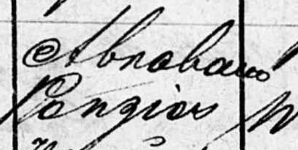 Many databases theoretically allow for searches which automatically take spelling variants into account. However, the technology is far from perfect. When searching for your name, you may get many false positives and can also miss out on many important records. When doing your search, try to think of every possible way the name might be spelled, misspelled, or mispronounced. For example, an English speaker might misspell “Rosenstein” as “Rozensteen,” “Rozenstean,” “Rosenstine,” or in any number of other ways. Your job is to figure out not only how an English speaker might misspell your name, but also how a German speaker, Polish speaker, or Lithuanian speaker might. Familiarity with different European languages’ spelling systems is indispensable.

A further complication for database searching arises out of Jewish marriage practices in nineteenth-century Europe. In many cases, Jews married in religious ceremonies but did not receive civic, state-sanctioned weddings. In such cases, the couple’s children would receive the mother’s last name instead of the father’s. Theoretically, the father’s last name was supposed to be provided on the records and often shows up in databases, but this is not always the case. You will probably gain important insights by determining the maiden names of your ancestors’ and relatives’ wives and then searching for these names—again keeping in mind the various ways it may have been spelled. In my own research I have found many additional siblings who were listed under entirely different last names than the ones I was expecting.

Finally, many last names are very common, particularly among Jewish families. It is important to realize that just because you find someone with the same last name as you are looking for, it does not mean that that person is definitely a relative. In some cases you may be able to find corroborating evidence that they belonged to your family. However, for very common names (think “Horowitz” or “Cohen”) even people with the same last name in the same small village might be unrelated. Even if you have a relatively uncommon name, keep in mind that hereditary Jewish last names were first given in Central and Eastern Europe between the late eighteenth and mid-nineteenth century. If you find another family with the same last name as yours, try to figure out where they were living at the time when it received the name. If they were living far away from your family in the early nineteenth century, it is almost certainly an unrelated family who received the same name by coincidence.

As with many other fields, the digital revolution has transformed the way we do genealogy. Modern tools and research techniques offer unprecedented insights into where and how our ancestors lived. Yet as with any endeavor, take the results with a grain of salt, educate yourself, and be prepared for additional sleuthing.