When putting together a family tree from metrical records, you will often get many of the usual details: names, dates, and sometimes occupations. In addition, original records can often provide addresses as well. When you look at the data and start to aggregate it, some interesting trends can start to emerge. Using this kind of analysis can give you fascinating insights into the history of your family. Using some novel techniques, you can begin to tease out a living, breathing stories out of static records. This involves many complications and takes a great deal of effort, but it can be well worth it.

As mentioned above, many birth, marriage, death, and other records provide addresses for our ancestors. However, these addresses were not given in a form that we would recognize today. Rather than identifying a street and a number on that street (as in today’s addresses), nineteenth-century records often give addresses in the form of “house numbers.” The system is completely different, and requires a bit of background information.

House numbering systems were very common prior to the late nineteenth century, particularly in Central Europe. In cities and towns using this scheme, every individual building in the whole city was given an individual house number. In large cities such as Warsaw, house numbers frequently number in the thousands. Other cities like Lemberg, Galicia (today’s L’viv, Ukraine) were divided into sections; within each section, each building was given a unique house number. In most nineteenth-century records, our ancestral locations are identified in this way.

In general, it is very difficult to work out the actual locations of these house numbers. They do not necessarily correspond to geographic area, and there is nothing to associate a given house number with any particular street. Cadastral maps of the period are not particularly helpful either, as they typically provide parcel numbers rather than house numbers (the two are entirely separate). If you can find property records for a house number of interest, this will also list the parcel number and allow you to locate it using a cadastral map. However, this is not always possible. Property records may not have survived, and they are almost never online.

Despite these challenges, there may still be a path forward, particularly if your ancestors were city dwellers. In some cities, especially the larger ones, there is often a way to identify the location of house numbers without having to depend on property which that may or may not exist.

In many cities, by the late nineteenth century this house number method of addressing became unwieldy. With industrialization, rising populations, and the emergence of modern mass transit systems, city planners in larger urban areas felt the need to transition from traditional house numbers to more manageable addressing systems. Rather than assigning a unique number to every building in the city (or in a large section of the city), such systems identified buildings by street and address number—as is the case today.

Fortunately, many cities published directories during the time when this change came into effect. These directories, the predecessors of modern telephone books, usually contain a section explaining the old and new addressing systems. Today, they can provide researchers and genealogists with the street names on which house numbers were on. Many of these directories are available in online archives, and are frequently searchable on Logan Kleinwaks’s website, www.genealogyindexer.org. Although they are typically written in the language of the country rather than English, they are usually fairly easy to follow—and sometimes they may even be bilingual. 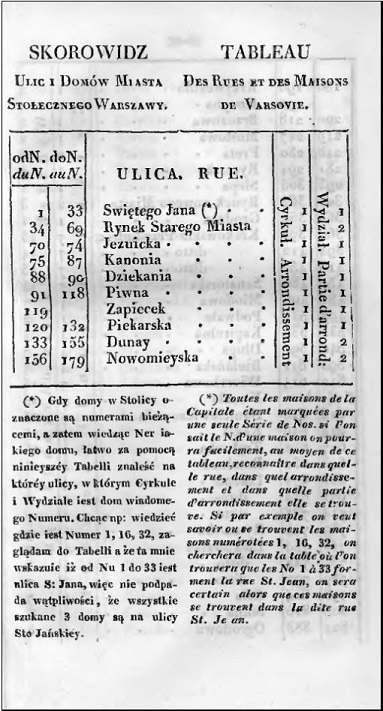 Zeroing in on a Location

Unfortunately, things are usually more complicated than simply looking up a house number on a chart. First of all, street names have changed frequently since the 1870s, especially in Eastern Europe as a result of World War 1, World War 2, the fall of Communism, etc. As a result of various border changes and political upheavals, a given street may have had four or more different names at various points since the 1870s.

There is a further complication as well. In the above example, taken from an 1826 city directory for Warsaw, looking up a given house number in the city of Warsaw will provide you with its street (at least, the name of the street at the time the city directory was printed). However, this does not provide its location on that street. Moreover, even if you do get a number on a given street, the numberings themselves are more than likely to have changed since the nineteenth century. As cities grew and new buildings were added between existing houses, it is likely that the numberings on any given street may have been reset from time to time.

To see this, let’s take a hypothetical example. Suppose you found house #2416 in an 1868 birth record and would like to see where in the city it was. Looking in a directory from 1873, you find that this house number corresponds with #26 Rudolf Street. Using a variety of historical maps, you are able to trace the history of name changes for Rudolf Street and locate its current name. Even still, there is no guarantee that #26 Rudolf Street in 1868 would have been at the same location as #26 Kosciuszko Street in 1923, #26 Karl Marx Street in 1954, or #26 Solidarity Street today.

Fortunately, you can often use other clues to help. Witnesses in marriages, births, and deaths were frequently close friends who often lived in close proximity to one another. If you are lucky, you may find that a witness lived on a street that intersected the street where your ancestor was living. Although it is far from certain, it is at least reasonably suggestive that your ancestor may have lived near that intersection.

In some cities such as Lemberg, houses that were located at the intersections of two streets are given addresses on both streets. If you are fortunate enough to have had an ancestor living at a street corner, you will be able to tell the exact location of their residence (although not which corner). If not, your research may uncover that house numbers on a given street increase sequentially along a street from one direction to another. Using a bit of detective work, locate the first intersection on your street with a house number higher than the one you are trying to locate. Then, do the same for the last intersection with a house number lower than the one of interest. You may reasonably conclude that your ancestor’s house was between these two intersections, and you may be able to gather if it was significantly closer to one of these intersections than the other. These methods can provide you with quite good estimates for the locations of your urban ancestors. 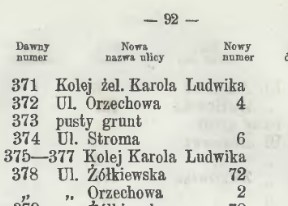 In my own family research, I was able to create several fascinating map series. Using the techniques above, I was able to come up with good estimates for much of my grandfather’s father’s family, who lived in Warsaw during the late nineteenth century. On my grandfather’s mother’s side, several distant relatives moved to Vienna around the turn of the twentieth century.

Most of my ancestors lived in Warsaw for only around twenty years, arriving in the 1870s and leaving by 1894. Likewise, the relatives who moved to Vienna lived there for only a few decades. Thus, the maps shown above more or less represent snapshots in time.

Unlike Warsaw and Vienna, my family lived in Lemberg for at least 150 years, perhaps significantly longer. They are traceable there from the 1780s until the 1930s.  By the late nineteenth century, my family there was huge. Using the above techniques, I was able to produce a series of maps showing their locations across the city. More than that, I arranged them into an animation depicting their movements over time. Each slide shows the location of various family members at a given time in history.

Using this map series, I can follow the movement patterns as my family grows and spreads out in front of my eyes. I can watch as the family starts in two houses in the 1780s through early 1800s, then spreads out to more houses in new areas and on larger streets. Some family members stayed in the same houses—one house stayed in my family from approximately 1800 until after 1870. Conversely, other family members moved around a lot, especially the more prominent ones.

I also used similar techniques to locate the building where my grandfather’s grandfather was born in 1869. It turns out he was born on the old market square in the Jewish district of Lemberg, overlooking the Progressive Synagogue. His mother owned the building, and his maternal grandparents were living around the corner on the same square in a building they owned.

Maps and animations such as these can provide all sorts of fascinating insights into our families’ lives. More even than discovering where they lived and when, it can also provide other insights as well. Which relatives lived close to which other ones? Perhaps were certain relationships closer or more strained? Were there any “black sheep” of the family? Which synagogues did they live near?

Using Google Street View, you can even have a view of what the actual locations of your ancestors look like today. In some cases, you can determine that the very buildings themselves still exist! Short of flying halfway round the world, this is perhaps the most powerful way of reconnecting with our ancestors. Moreover, should you decide to travel to your ancestral cities, teasing out their actual locations in this way can be incredibly helpful in seeking your ancestors’ steps. Just imagine being able to actually visit the very building where your great-great grandfather was born!