It is with the utmost sadness that I inform you of the passing of my beloved grandfather Rolf Grayson. To say that he was an inspiration does not even begin to do justice to this towering figure. In fact, Papa was the person who first introduced me to genealogy, captivating my youthful imagination with stories of his grandparents and great-grandparents.

Papa was born in Munich, Germany in 1921. His maternal grandparents had been immigrants to Germany from Galicia, and he was extremely close with his grandfather--as frequent readers of my blog are undoubtedly aware. His grandfather taught him all about his family's Eastern European Jewish customs, traditions, and heritage. He grew up in a traditional yet also assimilated family--he attended synagogue, celebrated all of the Jewish holidays, and learned Hebrew, but also attended concerts and operas, visited museums, and received a secular education. When the Nazis ended public education for Jews, Papa attended a Jewish school for a few years, and when that closed he became apprenticed as a machinist.

As a teenager, Papa heroically stood up against the Nazis and helped other Jews in any way he could. Several incidents stand out in my mind. When he was 16 years old, Nazi police knocked on his family's door one evening. Although radios were allowed to civilians, listening to foreign broadcasts from Switzerland was strictly forbidden. Periodically and randomly, the police would inspect civilian radios to see what station they were tuned to; they would be confiscated if found to be tuned to a Swiss station. This was the case when the police entered my grandfather's family home. Several hours later, a young, hot-headed Jewish sixteen-year-old marched straight into the Nazi police station claiming to be exempt from the German government's restrictions on private radios due to his family's Polish citizenship (citizenship in Europe was by ancestry, not birth, so Papa and his family were Polish citizens). He demanded that they return his radio to him -- and they gave it to him!

Later that year, Papa and his uncle Karl (who was only ten years older than him) went to the trains bringing people recently released from Dachau. The two of them helped reunite recently released interns with their families, and arranged transit for those who were from other cities in Germany. Sadly, some unfortunate souls had perished either in Dachau or on the train rides back to Munich; my grandfather and his uncle helped prepare their bodies for burial. In addition to helping recently released interns from the first Nazi concentration camp, Papa also worked with various youth organizations to help smuggle other Jews out of the country into Palestine through the Aliya Bet. As a Polish citizen, his permission to reside in Germany was officially revoked in 1938, but instead of going to Poland he spent the better part of a year living illegally in Berlin helping secure visas for other Jews. In September 1939 he was able to procure a visa to England for himself.

In England, Papa participated in an agricultural program with other 18- to 20-year-old Jewish refugees who, like him, were too old for the Kindertransport. He worked on a farm in northern Yorkshire with them for several years, then moved to London where he used his machine experience to secure positions in factories. During the war, he always walked with his head held high while dodging bombs. At his factory jobs, he took turns with other workers standing on the roof watching for enemy bombers and hosing down incendiary bombs with water to prevent the entire structure from burning down. In England he met and married the love of his life, Mira; they would have celebrated their 75th wedding anniversary this July.

Our family was reunited after the war and moved to America a few years later. Papa used his extensive technical experience to secure impressive contract work, eventually leading teams of hundreds of people. He was absolutely devoted to Nana and to the rest of the family. Together they brought up two children; they had four grandchildren and six great-grandchildren.

Wherever I go in my life, I will always hold myself up to his example. Papa taught me to always hold my head high, fight fearlessly for what I believe in, never lose sight of what's most important to me, and always treasure the people in my life.

To read about his life in much greater detail and in his own words, please see his memoir, available at http://lostrootsfamilyhistory.com/Rolf_Grayson.html. 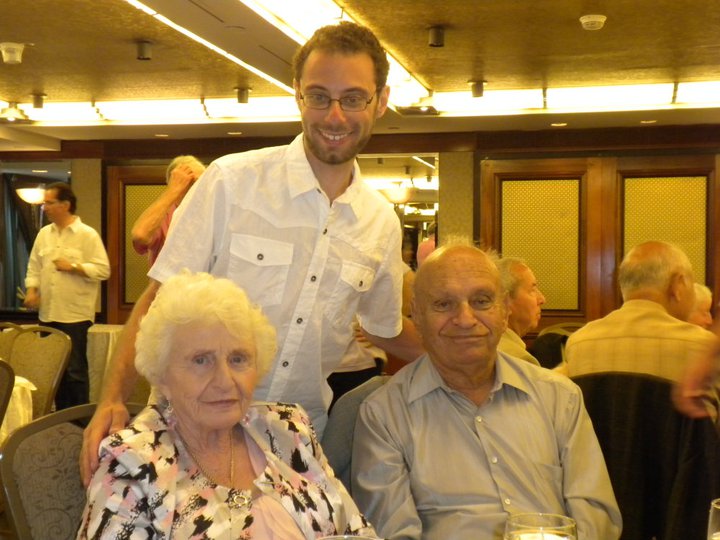